Darren Wilhite and Tim Wall have been waking up country listeners for many years.

Darren was born and raised in Arkansas and is a music know-it-all. He’s memorized the history of your favorite artists and their hits. He’s also a pop culture guru that keeps up with everything but the Kardashians.

Tim Wall spent his childhood between St. Louis and Kansas City. He settled upon the “Gateway City” because he loves beer as much as he does great country music. He’s a big baseball fan and plays a little guitar on the side.

Wilhite and Wall have been lucky enough to garner two CMA awards for their morning program. Heck, at one time, they even had the highest rated radio show in the U.S.

Darren and Tim have one motto and that’s “Have Fun”! That’s what you’ll hear every day on the show. They put a twist of humor in everything they do. 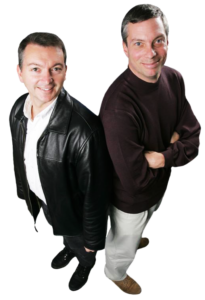