Still fresh from landing his fourth #1 single, Randy Houser shows no signs of slowing down as he just released another single this week. The catchy song called “Song Number 7,” is currently the second most-added song at country radio, just behind Kenny Chesney. And has already marked it’s place as his biggest first week single…ever.

Randy has posted a lyric video, something he plans to do for every song on the album.This is one of the songs that Randy didn’t write, but Chris Janson is credited as co-writer on it..

Randy is currently touring and will join Dierks Bentley for the Somewhere On A Beach Tour starting in May.

*Denotes dates for the 2016 Somewhere On A Beach 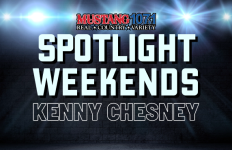