When did Legos become so violent?

Legos have been around since 1949 and have been a favorite toy for many children including myself. However if you stop and look at the Lego section today, you may begin to notice something different compared to the Legos of yesterday … They seem to depict more violence.

The first weapons were introduced in a castle set in 1978 and since then the amount has increased to nearly 30 percent of all sets sold today. A recent study of the Lego brand revealed nearly 40 percent of all Lego packaging images show some sort of violence with ‘shooting’ at the top of the list. 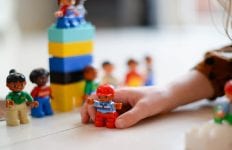 Classic Toys That Stood The Test Of Time→

MMM Top 10: First World Problems That Stress Us Out→