The last few weeks have building towards the New Orleans Pelicans cashing in their number one pick. It was a six percent chance to land that pick and they did the right thing and picked Zion Williamson.

“I didn’t think I’d be in this position,” an emotional Williamson said while he was on stage after getting selected first. “My mom sacrificed a lot for me. She did everything for me and I just want to thank her. She put her dreams aside for mine.”

Shonda Sampson coached Zion when he was growing up and she mentioned that “To watch his hard work pay off, we’re so happy for him. I’ve seen somebody that believed in the process, put in the work, put the naysayers aside and continued to do what we asked. Because of that, we’re here.”

Williamson only played one season at Duke but was undoubtedly the top pick in the NBA Draft after his freshman season where he averaged 22.6 points and 8.9 boards per game on the way to winning the Naismith Award, which is presented to the best college basketball player in the country.

“What excites me the most is the fact that they’re young and they’re close to my age so they can help me a lot more, like how to deal with this transition,” Williamson said during his time with the media in reference to the new players “I think we can build something over there.”

According to Bobby Marks of ESPN, Zion will earn $9.7 million in the first year of his contract with a total of 44.2 million over four seasons. 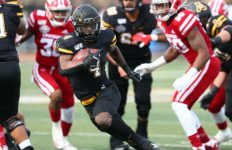