Brad Paisley helped execute a marriage proposal during his recent show in Bloomington, Illinois. After some confusion as to which couple was about to get engaged, Brad’s crew helped the right couple up on stage where the groom-to-be dropped to his knee and popped the question. In addition to snapping cell phone photos of the proposal with a phone belonging to the couple’s friend, Brad also managed to serenade them with “She’s Everything.” 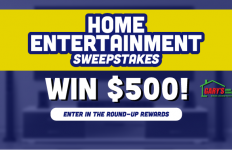