Photo by Stas Knop from Pexels

Bill Clinton was in his first term as president.

Jim Carrey’s “Ace Ventura: Pet Detective” was the number one movie at the Box Office.

The Dallas Cowboys won their second straight Super Bowl and the Buffalo Bill had just lost their fourth straight.

John Michael Montgomery’s “I Swear” is the number one country song in America (and would be for the entire month of February).

And that same month a young, bright-eyed, twenty-one-year-old college kid stepped behind a microphone to do his first radio show.

Not only was it my first on-air shift but it happened at midnight on a Friday, right as a George Strait concert was letting out at the Cajundome. Yep, lots of people heard my voice that night and it was one or two octaves higher than it should have been.

Lots have changed since then. Dallas has never been back to the Super Bowl (neither have the Bills), Clinton was impeached, Jim Carrey’s career fizzled and I am nowhere near as young or bright-eyed as I used to be. Have I really been in radio for a quarter of a century? There’s an old saying in this business, “There are two kinds of DJs: those who have been fired and those who haven’t been fired yet.” So far, and quite miraculously, I am still in the latter category. Radio has changed a lot in that time as well. My first on-air shift was from Midnight to 6 am on Friday and Saturday nights. My first full-time show was Monday-Friday from Midnight to 5:30 am. Those two shifts do not exist anymore. Jobs in radio are fewer and farther between as automation and voice-tracking have replaced live jocks.

Country music has also changed. Let’s be honest, there has always been push back from the Old Guard when new acts hit the scene. The reason Willie, Waylon and Hank Jr. were called outlaws is because the music they were producing was drastically different from what was considered “country” at the time. Many of the outlaws weren’t enamored when the so-called “hat acts” (Garth, Alan, Clint, etc) lit up the charts in the late ’80s and ’90s. And Shania was seen as “pop” by many in the industry.

Today, for many of us. Country music sounds nothing like the music we grew up hearing on the radio. Compared to the sound of today, Shania sounds more like Waylon than Kane Brown. While it would be easy to bang on “New” Country (and I could…for hours) that’s not where I’m going with this. Brooks and Dunn recently released their first new album in 12 years. Called “Reboot” it’s Kix and Ronnie singing their greatest hits with current artists, in the current style. The songs are filled with lots of backbeats, autotune and reverb. Frankly, it’s not my flavor of whiskey.

But maybe instead of screaming to the heavens that they are destroying beloved classics, I should adopt a more optimistic point of view (that’s a big change for me!). Maybe someone who only listens to the modern country will like these songs so much that they seek out the original versions. Maybe this album will expose them to the beauty of the music that made fans of many of us. Ronnie Dunn’s voice can outdo any auto-tune or mixing trick any human can devise. And despite the window dressing, the words of the song “I Believe” can still stir your emotions. An old dog like me can hope that a new trick pays off. Maybe “Reboot” will do just that for the entire country music format. Maybe it ignites another “back-to-basics” country sound.

So while no one is working overnights in radio anymore and there’s little chance Ace Venture 3 plays at a theater near you, maybe not all hope is lost.

After all, Clinton kept his job and OJ has been released from jail.

Twenty-five years from now, anything can happen.

Wash Your Hands to This→

We Will Finally Have An Accordion Emoji→ 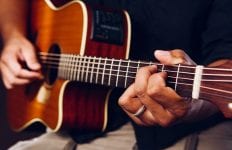