This weekend, Mustang 1071 is shining the spotlight on Garth Brooks! Starting this Friday at 5:00 pm, we will play a double-shot of his music every hour! Stay connected even when you leave town, download the free Mustang mobile app. Make instant requests.

Garth Brooks was born in Tulsa, Oklahoma. His family held weekly talent nights. Every sibling was required to participate. Garth Brooks had 5 older siblings. Garth learned how to play the guitar and the banjo and used them in his weekly family performances. Although Brooks sang often with his family, music was not his obsession as a teen. He enjoyed playing sports and in fact he a talented athlete. He played football, baseball and ran track. He was so good at throwing the javelin, that he received a track and field scholarship to Oklahoma State University. After college, he began to focus more on a career in music.

Garth Brooks got a band together and played in clubs and bars in Oklahoma. In the beginning, he was more interested in rock music. He was a huge fan of James Taylor. But something happened to him when he George Strait’s hit song ‘Unwound.’ He decided he wanted to focus on country music. By 1985, Garth Brooks had a huge following. He was creating so much buzz in the music industry that an entertainment lawyer drove to Stillwater, Ok just to hear him play. This lawyer offered him to help and encouraged him to move to Nashville. Garth got a plane ticket, flew to Music City, had a bad experience and returned to Oklahoma within 24 hours. This same lawyer, Rod Phelps pleaded with him to return and give it another chance. Garth Brooks and his wife at the time eventually returned to Nashville two years later. This time, success was waiting. 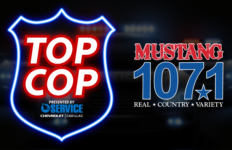 Christmas in the Park at Moncus Park – Win a Family Pack→