This weekend the Cajun Country Run took place at Acadiana Park. The Cajun Country Run is part of a series of events called the Le Courir des Cadiens race series. The next race is the Zydeco Marathon and Half. This event also supports the non-profit organization TRAIL. TRAIL works with our local government to create places to run, hike, paddle, bike ride and more. One of the projects TRAIL completed was the Acadiana Park and Nature expansion project. TRAIL purchased land to make the park bigger. If you want to find out more, volunteer and donate to help TRAIL’s cause, visit latrail.org.

Participants had the choice to compete in the half-marathon, 10k, or 5k with the chance of taking home a trophy constructed out of a real alligator head. I signed up for the 10k. Although, I am an avid runner I have never competed in a 10k road race. I really do run for fun. When I have free time, it is something that I just honestly enjoy doing. But I have not raced anyone since my cross country days in high school so of course, I was excited and quite nervous.

The sky was cloudy and the temp was around 50. The air was a little chilly but chilly weather is actually good weather for running. According to the Cajun Country website, parking was available at David Thibodeaux STEM Academy. By the time I got there, it was already filling up. There was a shuttle bringing people to the starting line. I decided to skip the bus and walk off some of these butterflies. I arrived about 30 minutes early.

Acadiana Park was full of people stretching, jogging in place and laughing in groups. Some were dressed up in holiday outfits. From Santa hats to Christmas socks and skirts, these runners were definitely in the holiday spirit and possibly hoping to take home a prize for best dressed Santa. This event attracted people of all ages from different parts of the United States. I overheard a group talking about how they had traveled from Colorado and another group drove down from North Carolina. As I walked closer to the start line, I could hear someone announcing over a loudspeaker the start times of each event. It was a countdown and before I knew it, I had 5 minutes before race was to start. After talking to a few other runners at the start line, it turns out, I was not the only person who has never competed in a 10k. There were a bunch of us.

The race started and the course weaved down a road and around a field. There were several water stops. And somehow, through magic, I managed to keep up with a group of men in front of me. I decided as long as I kept this group of guys in my sight, I would not get lost or fall behind. By the time I reached the 4-mile mark, it was getting harder to hold my pace. I felt tired. I just knew someone was going to pass me up. But it didn’t happen. And before long, the race was over. I crossed the finish and was handed a cute little wooden metal. I ended up being the first woman and 7th overall.

At the end of the race, a tent was set up serving jambalaya, fruit, and drinks. There was an award ceremony after the race. Top finishers received Gator Head trophies and License Plates medals. It was such a relief to finish the race. I really had fun. I plan on signing up next year.

Masks Will Be Available For Students→ 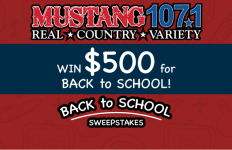 Back to School Sweepstakes→