If you are in the market for a home in Lafayette, there’s a realtor that is giving one away for free. Anyone interested would only have to pay the cost of moving it from the property. The home is located on Verot School Road. You may have seen it before. It’s a big white four-bedroom house that was built in the 1930s.

According to an article, the realtor recently posted photos of the home in the hopes of finding a new owner and the listing received lots of comments from people suggesting the home is haunted. In the article posted by the Mirror, a former tenant believes the home is haunted is by her grandmother. The tenant says her grandmother passed away at the age of 90 inside the home in 1967. Her grandmother was just under 5 feet tall and loved to rearrange pots. According to the former resident, there were often strange sounds coming from the kitchen.

This home is located on a road that I travel down quite often. And I have always admired it. It is a giant two-story house that looks like a farmhouse out of an old south movie. After doing a few searches online, I managed to connect with one of the former residents of the home, Dawn Vallot DeClouet. The home belonged to her grandparents Joe and Lula Vallot. Her father Earl Vallot spent his childhood in the home. She told me her grandparents owned the Grandview Nursery. The nursery was adjacent to the home. Also living with her grandparents was Adele Vincent and her aunt Mathilde Vincent.

Dawn says she has good memories living in the house. Her father was married on the grounds near the trees. They had huge family barbecues on the weekends and cooked fried fish every Sunday. The yard was always full of people. From time to time, she experienced unexplained sounds and activity, but it was never frightening. The energy of the home was always happy and positive. She and her brother assumed the sounds they heard could have been the spirit of her grandmother. The sounds mostly came from the kitchen. Her grandmother loved to cook and was often fiddling around in the kitchen. She says she felt as if her grandmother was watching over her. It was definitely not a menace.

Dawn Vallot also says she is happy to report that someone has decided to take ownership of the home and move it to a new location. A subdivision will be built in its place. 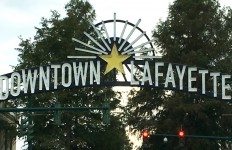 How to Help Support Downtown Lafayette During Their “Month Of Giving”→

Ways To Honor Our Fallen Soldiers This Memorial Day→

Louisiana Will Move to Phase One on May 15, COVID-19 Stay at Home Order Will Be Lifted→