This weekend is dedicated to Waylon Jennings! Starting this Friday, Mustang 1071 is playing a double shot every hour.

Download the Mustang 107.1 FM app! It’s free and you can make instant song requests. When at home tell Alexa or Google to play Mustang 1071.

Waylon Jennings is considered to be one of the founding pioneers of the Outlaw Movement in Country Music. He was born in Littlefield, Texas. He started playing guitar at 8 years and by the time he turned 12, Waylon Jennings singing live on the radio. His called his first band the Texas Longhorns.

Waylon Jennings quit school and hit the road at 16 to pursue music full time. He moved to Arizona and worked as a radio DJ.

Waylon Jennings met Buddy Holly in 1958. Holly hired Jennings to play bass in his band. Waylon almost boarded the plane that killed Buddy Holly, JP The Big Bopper, and Ritchie Valens, but lost his seat in a coin toss. Jennings continued to play rockabilly music for the next few years with little success.

Eventually, his career took a turning point in the 1970s when started to play the music that some dubbed as “outlaw country.”

Waylon Jennings was inducted in the Country Music Hall of Fame in 2001.

Party in the Park – THIS SUNDAY AT MONCUS PARK→ 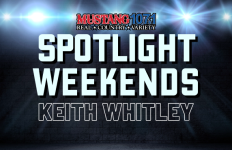