Men holding puppies can be attractive to some people, but a new study reveals nearly half of women are attracted to men holding fish. Fishing app Fishbrain analyzed Tinder photos used by 18-to-35-year-old men in Florida, and found that 22 percent chose a photo of themselves posing with a recently-caught fish. Researchers then polled more than 1,000 members of a college sorority to see how they felt about the photos, and found that 46 percent said they found the photos of men with fish sexier compared to those who had photos without fish. Nearly 25 percent of the women said the Great Northern Tilefish made the guy smiling next to it look the most attractive, but less than one percent said the same of men posing with juvenile carp (which can only grow up to six inches.) The study obviously was not scientific, and only took into account dating life in Florida, where fishing is very popular. 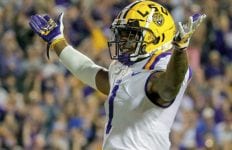 LSU GAMER: Burrow Near Perfect as Tigers Hold Off Gators 42-28→